More than a year after companies were banned from having costly customer service numbers, we found that some travel companies were still using them. Where have you spotted pricey 084 numbers?

At the time of investigation, coach companies Eurolines and Green Line’s websites showed higher-rate phone lines, starting 084 or 087. This is despite Consumer Contracts Regulations stating that all customer service lines must use basic-rate numbers, such as 01 or 03.

Eurolines has now changed its website and said the 087 number was incorrectly listed and that previous 087 callers were redirected to a cheaper number. Green Line apologised and promised to change its number urgently:

‘We wish to apologise to our customers for our oversight and to thank you very much indeed for bringing this matter to our attention.’

Southern said that posters should be up to date in a few months:

‘With some 1,200 Southern and Gatwick Express vehicles operating on the network […] we have had to update posters on a rolling basis, which means there are still some train posters that display 0845 numbers. We expect all of our on-train posters to be up to date over the coming months.’

Southern added that it notifies 0845 callers that there is a cheaper 0345 number available. If you feel you’ve been charged more than you should have, Southern asks you to email them with details of the time, date and duration of the call(s) to comments@southernrailway.com. Southeastern told us that it’s updating information on trains in line with ‘planned refresh work’.

Have you been forced to ring an expensive number to get though to a travel firm’s customer service line?

The most important first step is to get the new 01, 02, 03 or 080 number operational and then update the contact details on websites and social media as well as in press and media advertising.

The final steps are to update posters, leaflets, forms, email templates, document templates, receipts, signage, vehicle livery, and so on. This process can take many months or longer. Third-party websites and information may never be updated.

Many organisations have new numbers operational, but haven’t yet updated all of their marketing materials. Wherever you see an 084 or 087 number advertised, always try calling the matching 034 or 037 number first. If it works, it will be a cheaper call. If it doesn’t, there will be no charge for trying.

Let’s have the free announcement NOW on the 084 and 087 numbers and leave the companies to update their websites etc at their leisure. The have made enough money from the public without dragging this out any further.

I like American Express’s approach on its existing 01, 084 and 087 numbers. If you dial the old numbers, Amex immediately tells you a new 0800 number, but also advises you to hold if you really want to continue using the dialled number (useful for a minority such as those calling from abroad).

Why did these travel firms wait until after the ban on 084 and 087 numbers took effect on 13th June 2014? They should have taken action months before these numbers were outlawed.

Travel firms are particularly significant. Regulation 41 of the Consumer Contracts (Information, Cancellation and Additional Payments) Regulations 2013 originates from Article 21 of Directive 2011/83/EU on Consumer Rights, so similar rules apply all over the European Union and the wider European Economic Area. The directive excluded passenger transport services from the ban on these numbers, but the UK decided to omit this exclusion (partially as a result of pressure from Which). Therefore airlines’ telephone numbers are covered by the legislation in the UK, but not in all other EU and EEA countries. This has the effect that consumers all over Europe can contact airlines via their UK telephone number in order to avoid a surcharged number in their own country.

The Directive didn’t exclude passenger transport companies. It simply gave member states the option to exclude, or not exclude, based on their own criteria.

Pressure from another campaign group, and from organisations within the industry itself, persuaded the UK government to not take the option to exclude.

Shall be keeping an eye on the Southern posters and signs to/from work over the next few months! 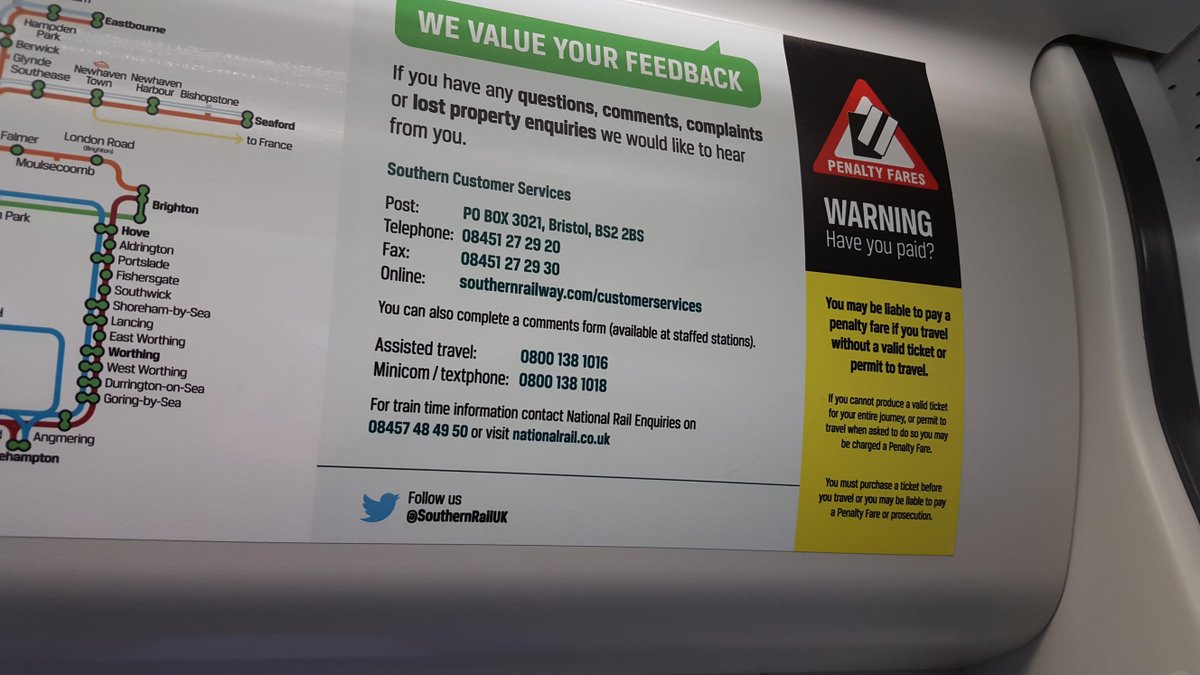 The delays and cancellations are enough to live with.

During the chaos and disruption on the Liverpool Street-Stansted line a few weeks ago, my girlfriend was told by Abellio GA staff that she should phone an 0845 number, which turned out to be national rail enquiries and effectively useless.

If that’s the case, then they made two mistakes. National Rail Enquiries uses an 0345 number these days.

Wherever you see, or are told, an 084 or 087 number, always try calling the matching 034 or 037 number first. If it works, it will be a cheaper call. If it doesn’t, there will be no charge for trying.

And where companies are allowed to use these numbers there are still many that AREN’T displaying the access and service charge as per Ofcom ruling that came into force 1st July 2015, 18 MONTHS after it was announced. When you complain to the ASA they then give companies another 3 weeks to change what they’ve already had 18 months to change. What a joke. We need regulators with teeth. Not the shower we have at the moment.

Automatic fines per day announced at the time of the announcement would have been very useful in paying for the regulator AND getting the work done speedily.

Regulation 6 (1)(g) of the Consumer Contracts Regs excludes any contract “within the scope of Council Directive 90/314/EEC of 13 June 1990 on package travel, package holidays and package tours”. So a travel agent or tour operator can use an 084 or 087 number for calls about a package holiday. The regulations also only apply to calls “in relation to contracts entered (note the use of the past tense) into with the trader”, so any call made before you have entered into a contract, such as an initial enquiry, is excluded from the regulations and a trader can use an 084 or 987 number. Of course, not many will, because they want you to ring them and buy something, but if they are selling short-supply items, eg concert tickets or special offer goods, they can legally use an 084 or 087 number. The regs stop one having to pay through the nose for customer service calls where there is no option but to call a specific number.

Allan, thanks for pointing out this ridiculous exclusion. I struggle to understand why any industry should be exempt from complying with Regulation 40. It should have been a blanket ban across all industries, with an exemption only for the types of contracts listed under Regulation 6(2).

I believe that it is intended that the Package Travel Directive deals with this issue for that sector.

And there’s me thought it was down to effective lobbying and politicians not wanting to tarnish their next gravy train.

Princess Cruises in Southampton use 0843 is that included

@mick, I think the 0843 number is a sales line and therefore the only rule they’re breaking is not displaying the access and service charge. So until someone complains to the ASA about them, they’ll keep using it and breaking ofcom’s rules.

Just looking thru the old farts daily newspaper they are still several companies using 084 numbers and not displaying access and service charge, but it’s too painful to report them, so I haven’t bothered 🙁

Yes, but a company cannot display the access charge since that depends on your service provider.

Thanks William. Always happy to be corrected. 🙂

2 doctors surgeries in my home town are still using 0844 numbers when you try to book an appointment
to add to the cost, it takes at least 5 minutes to get through at the best of times, and upto 15 minutes is not unheard of

Wizz Air charge £1 Per min. if you want to book a flight by phone!!!

other calls are free or very low cost

HAVE THEY NOT GOT THINGS SLIGHTLY BACK TO FRONT