It’s six years to the day since BBC Ceefax, the world’s first teletext service, shut down for good. But would you still use it if it was there? I know someone who definitely would.

If you asked someone now to guess when a service that allowed you to read all the latest news, on-demand, via your TV was launched, I don’t think ‘1974’ would be their first answer.

As such, when you think about it, Ceefax was incredibly ahead of its time – almost a precursor to the internet; a digital-style service in the analogue age.

Which? Conversation above, re-imagined as a Teletext page thanks to Matt Round’s Jellytext generator. What might your favourite pages have looked like?

Farewell Ceefax: Which? Conversation in 2012

Ceefax was much-loved in our house, mainly by my dad, whom I’m certain would still be using it now (ahead of his smartphone, tablet or any other device!) if he had the chance.

In the days before we had Sky TV, Ceefax (although we always called it teletext in our house) was the only way to keep up with the football scores.

If Ceefax was still going I'm 100% sure my dad would still be using it, claiming it's easier for him and quicker than the internet. pic.twitter.com/azi3qVgRk3

I remember the excitement of the black page very lightly flickering as a goal was scored and the update came in – it’s just a shame it was invariably a goal scored against Crystal Palace rather than the other way around.

According to the BBC, millions of Britons began investing in teletext-enabled TVs in the 80s. Ceefax contained recipe details, music reviews, calendars… it really was a mini-internet.

The BBC says that the service peaked in the 90s, with as many as 20 million viewers checking the service at least once a week.

As I grew up during the 90s and early 2000s Ceefax was always there. If it hadn’t become a victim of the digital switchover, I’m sure there would be loyal fans still finding it useful to this day (ok, maybe just my dad).

So, do you miss Ceefax? Would you still use it now? Did you go out of your way to buy a teletext-enabled TV? Let me know, and share your Jellytext creations with us if you give it a go!

I remember putting my general knowledge to the test on Bamboozle: 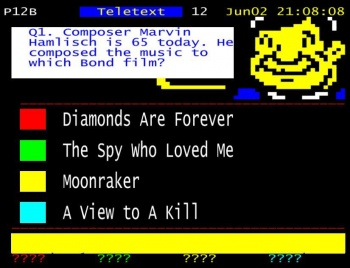 Gosh, I had forgotten all about Bamboozle – loved playing it! And of course it was the only way to get subtitles (888) wasn’t it? And did anyone else shell out £75 to get the teletext adaptor for the BBC Micro so you could download programs via Ceefax?

I can’t remember ever playing any games on it, but that looks great! I also didn’t realise The Spy Who Loved Me wasn’t by John Barry.

Interesting snippet: the Barry family have made all his Bond compositions free to download for personal use. And quite a few others by him. Midnight Cowboy is one such.

I didn’t know that. Where abouts are they to download? I own the You Only Live Twice OST – one of my favourites.

(I will tell myself to get back on topic!)

I ought to have made it clear that it’s the MSS – the printed music – and not the actual recordings. They’re all here.

I certainly liked teletext. In the days before the internet and with only a handful of TV channels it was a way of catching up with the news quickly as soon as you got home rather than waiting until nine o’clock. It meant you could quickly select which pages you wanted to see and rapidly go through or skip them without having to watch a whole bulletin in case there might be something of interest. For ease of access to what you wanted it was the closest thing to a good newspaper.

I still sometimes use modern digital teletext. But, mostly, I just use the internet.

As I seldom carry a TV around with me, but usually carry a smartphone, I’m much more likely to use the internet.

Derek, “As I seldom carry a TV around with me” – very well put! Even at home, my laptop is always switched on, whereas the television is often not. And televisions lack keyboards for entering text.

I have a wind up gramophone and some 78 rpm records. They are a nostalgic reminder of the way we enjoyed recorded music. Drawing a parallel with teletext, it served its purpose well and I used it extensively. Like others, I sometimes use the red button on the TV to catch up, but with so much information instantly available in written and video format, the world has moved on and I don’t particularly long for the return of Ceefax. However, if the current trend of infecting and corrupting the internet continues we may well be forced back to more primitive forms of communication.
The use of pixels to build pictures was a very clever skill and those back and white squares and instantly recognisable type face, are an icon of the seventies, when red telephone boxes loitered on street corners and cathode rays came in a 27 inch size if you could afford it.

I’m all in favour of preserving and understanding how we lived and worked in the past.

Topically, but slightly off-topic, news just received here is that the Gwynedd slate landscape is being put forward for a Unesco world heritage bid.

I was lucky enough to hear David Gwyn and John Humphrys talking about it on BBC R4 this morning.

(*) Rivet counters may note that the BBC’s photo caption in the article cited above “The buildings are now derelict – but the slate scars remain at Dinorwig, Llanberis” is true on the upper levels of those quarries, but not literally true for the buildings shown. The “Fire Queen” shed is little changed today:

and the nearer building in that shot has been rebuilt as a station building for Reilffordd Llyn Padarn.

That said, local workers no longer commute by velocipede – but one or two are preserved in museums.

But, away from preserved locations, buildings look more like the ones shown here:

Given that Ceefax didn’t start until 1974, most of the iconic Welsh slate quarries and mines were already closed by then.

“That said, local workers no longer commute by velocipede – but one or two are preserved in museums.”

I guess so – oh and by the way, how many mpg do you suppose they got from those contraptions??? 😉

On reflection, “miles per gallon” would be an anachronism there – more appropriate steam railway units for fuel consumption were “lbs per mile” (i.e. of coal).

You might be interested in a teletext or viewdata keyboard in use in the 1980s.
There were 7 colours plus the black background. Characters were selected from the keys with the alpha(bet) symbols, graphics from the other set. Each graphic character was made up of the block of six white keys.
.

That’s brilliant! Have sent it on to @katebevan who I know will love it as well.

The unlabelled white keys are an invitation to press them, though the last words spoken by mankind could be: “What does this button do?”

I like the teak frame for the keyboard and the coloured keys along the top. My current utilitarian HP keyboard looks rather disreputable by contrast. It could do with a wash as well.

I’m not sure about teak, John. I think it’s a Cherry keyboard. 🙂

Yes, I still miss it, it was very informative!

Although ceefax was withdrawn some time ago it has been replaced by the red button text service which provides a similar source of instant information includig weather, travel, financial and news services. My single source of irritation is that its unable to print the euro sign (€) and when articles are posted, as they are almost every day, with a euro sign and figures for a sum of money, the figures appear without any indication that they are euros. I’d have thought by now they could have updated it.

The beauty of Teletext was that it was fast. I reckon you could locate and read a normal news item in the time it takes just to find it on the internet. It was near instantaneous,none of yer internet latency problems there!

As far as I am concerned it hasn’t gone away. Just press the red button on the remote while tuned to a BBC channel. I find the best way is when i am tuned to a radio station. There you will find all the useful info like news, weather even the football league tables. A great resource still.

Although early-adopters of home computers (I was a computer programmer in a previous life) we still use the BBC TV text service all the time. In summer, it’s on constantly, showing the cricket scores, my husband checks the football scores on it and we regularly look at the news section. The TV is in the living room, so if it’s switched on ready for when you want to view, why would you bother to fire up another device to see this information on the Internet?

Yes I certainly would use Ceefax – share prices and financial news updated, news updated and all available quickly. These days frequently the red button does not work at all or you have to wait ages for it. TV is in my lounge, computer is at the other end of the house and I do not have mobile devices.

The BBC still provides Text services on its Freeview digital TV channels, which I use everyday – they give me everthing that Ceefax used to give – so I have little nostalgia for the more clunky Ceefax.

BBC and ITV text services were very well used in our house, for instant checking of news or weather, arrival of airplanes at Heathrow, or even for family history enquiries. The reference library had Ceefax switched on all day.

I remember tellytext well. Single pages appeared quite quickly but if a ‘page’ consisted of ten or more pages that appeared in rotating sequence, it could be very tedious. It was useful to avoid looking at adverts but I gave up watching commercial TV in the 80s.

Ye, I still miss Ceefax. I miss the arrivals of planes at airports.
I watch the headlines, sports, currencies and weather. So, it should not close.

I booked my honeymoon back in 1994 using ceefax. And I checked the weather forecast every morning before work.

I still enjoy watching TELETEX on BBC 1 and 2 channels. Was CEEFAX the equivalent service run by ITV?