The DVLA has revealed a sharp rise in the number of scams it’s had reported to its contact centre. Have you spotted one? Let us know so we can get the word out.

The last time we covered DVLA scams here on Which? Conversation it clearly struck a chord – thousands of people read and shared the article throughout the year.

My questioning of the timing of the fake email was even picked up in the media, with both The Mirror and The Express using my quotes in separate articles.

Just over a year later and the DVLA has issued a new fraud warning amid a 20% increase in scam reports directly to them – 1,538 of them came in the last three months of 2019.

The reports include fake websites, phishing and smishing scams, which are all types of fraud we’ve been covering extensively in these examples:

Have you been sent a new DVLA scam?

The agency has said that motorists are being targeted with links to ‘services that don’t exist’ and ‘messages of tax refunds’.

We’ve seen tax-related DVLA scams before, such as this one from 2018:

Scams like this one prompted us to publish a fully comprehensive guide to DVLA scams, which echos much of the advice from the DVLA itself.

This includes remembering that you should only use GOV.UK sites for government services online.

“All our tax refunds are generated automatically after a motorist has told us they have sold, scrapped or transferred their vehicle to someone else so we don’t ask for anyone to get in touch with us to claim their refund”

If you think you’ve been a victim of a scam like this, contact your bank immediately and let it know what’s happened in as much detail as possible.

You can then read our guide on getting your money back after a scam.

Have you received one of these new DVLA scams? Have you got an example to share?

Please do let us know in the comments so we can help warn others.

You can also contact us directly with screenshots via email: conversation.comments@which.co.uk

I received a text message saying I had some road tax to come back? They wanted too many details about my banking and life and non off the links worked on there site but for a few seconds I was convinced it was the dvla. Luckily I twigged on but I bet there’s many that won’t.

I received an e-mail saying my motorcycle was due tax
I looked at the link which looks quite genuine but there are printing discrepancies and I went onto the gov site. Clearly they have tried to copy from this And I’d imagine quite a few people will be fooled. Please use the gov. Com site to verify before any payments are sent. It’s quick easy and free

I think you mean ‘GOV.UK’ website to make vehicle tax payments. GOV.COM is for USA.

I had a shock a little while ago. I entered my car reg. on Google as I was considering selling it and, simply out of curiosity, wondered what information was listed on there. Quick as a flash, came a message saying “Don’t buy this car it is a stolen car”. What a load of rubbish, and how on earth does anyone manage to put lies like that on a Google site without being questioned and the information verified? A few days later I had another try and just the usual info. was on there. Nothing surprises me any more about what lengths some people will go to to cause alarm and distress.

I received one of those emails last week. I deleted it right away. I have a very small car and pay almost no tax, therefore to suggest any money back was ridiculous. I am fairly savvy but it looks convincing and tempting thus able to lure many victims.

Had this scam text
From DVLA: We’ve previously written to you via post regarding reviewing your driving license information which we hold. We’ve noticed that you’re still yet to do so. To avoid suspension of your driving license please review immediately here [Link Removed]

Yes, I tried to renew my mother’s over 70 driving licence online. I had received the renewal in the post and went on to what I thought was the genuine gov.co.uk website, which took me to the gov.co.uk site. When payment came up as 76.59 £ alarm bells rang! Obviously Spanish I thought as £ instead of euro sign after the amount. Of course, I know now it is free of charge!
Still getting text reminders to sign in with my address and giving me a code. Sabodell Bank, or something similar. Changed Mum’s bank card just in case. How can they infiltrate a gov website?

If the website had .gov.co.uk in it then it wasn’t a government website. Government (and council) websites end .gov.uk.

At present .gov.co.uk could be leased – just waiting for an opportunist fraudster:

If you search the WHOIS database for gov.co.uk you will see:

This domain cannot be registered because it contravenes the Nominet UK
naming rules. The reason is:
third-level domains may not be identical to a UK second-level domain.

This is another area where Which? could be providing more awareness and education for members and moderators. During the pandemic I was at pains to point out that a domain ending nhs.uk is safe, but my comment was given no more credence than the post reporting it as a scam.

I hoped that my post would result in some informed comment, Em. The post containing “Anyone can set up a website ending .gov.co.uk” is clearly misleading even though three people had agreed with it. 🙁

I received a text from DVLA that I was due a refund from my MOT centre and to click on this link which I didn’t do just days after receiving one from them.

I was also tricked in to entering details into a fake site but did not complete as I became suspicious. I have complained to the DVLA who informed me that I had not been charged as I did not complete. The inference is that the DVLA has a relatonship with this scamming company and share data. Other have also suggested that the scamming company is allied to the DVLA. Why does the DVLA not do something about this. A web site operating in this way can be taken down. I am now contacting my M.P. and will expect some action. This scam is well publicised and the DVLA forum full of complaints about it so why no action?

It appears that some of the billing details associated with you might have expired or were otherwise charged.

Our system will automatically retry the billing process once your billing details have been updated.
It can take up to 5 working days for the records to update.

In order to continue to the payment page please use the following link.

Please Note: If you dont pay your vehicle tax on time you can be fined up to 700 £, or your details passed to a debit collection agency
————

So long as criminals keep sending rubbish out like that there is some hope, but only if people are wise enough to recognise it’s rubbish.

OMG back in April I had a call from a neighbour of my 97 year old Dad who was being chased by a debt collection agency & the fines were doubling every month. His road tax was due in December & although I normally do this online for him he hadn’t mentioned it & with lockdown I never though to chase him up to do it. I never received any email reminder & he doesn’t recall seeing the renewal letter by post. I paid the fine to get them off his back & eventually taxed the vehicle using information from the V5C,but now you’ve got me wondering if this was a scam

I received a form from DVLA to renew my over 70 licence. The form said online was best and advised me to look for a red mouse secure symbol to be sure I wasn’t being scammed. I can’t see a red mouse anywhere on DVLA’s pages. I’ve tried to contact DVLA by phone and chat but can’t get any response. I notice that the over 70s renewal link page shifts from gov.uk to motoring.gov.uk. But it’s all https: so it’s probably OK. Is it? Thanks.

This seems the site pathway https://www.gov.uk/renew-driving-licence-at-70

Don’t know what the red mouse is all about.

The website is motoring.dvla.gov.uk Basically, any gov.uk website is safe. Just remember that renewing your over 70 licence is free.

I get the red mouse image from the DVLA form D46P I was sent. So it must be about something. If DVLA says it’s their security symbol, and I’ll see it, then it should be there? I’m fairly sure that the site I’ve been on is genuine, but there seems to have been a lot of scams. So until I find out why the red mouse isn’t there, it seems unwise to use the site to renew.

I see no red mouse when I click through from the link, and I’ve looked in all the corners and behind the wainscotting, Is it an anatomical mouse or a computer mouse?

Maybe this is a feature computer or browser security software. I looked too, to no avail. Em might know.

Computer. Well, at least no-one else can see it.

I haven’t heard of this but suspect the same as @wavechange, will try and find out more on this red mouse symbol but the DVLA link should above is the correct one. 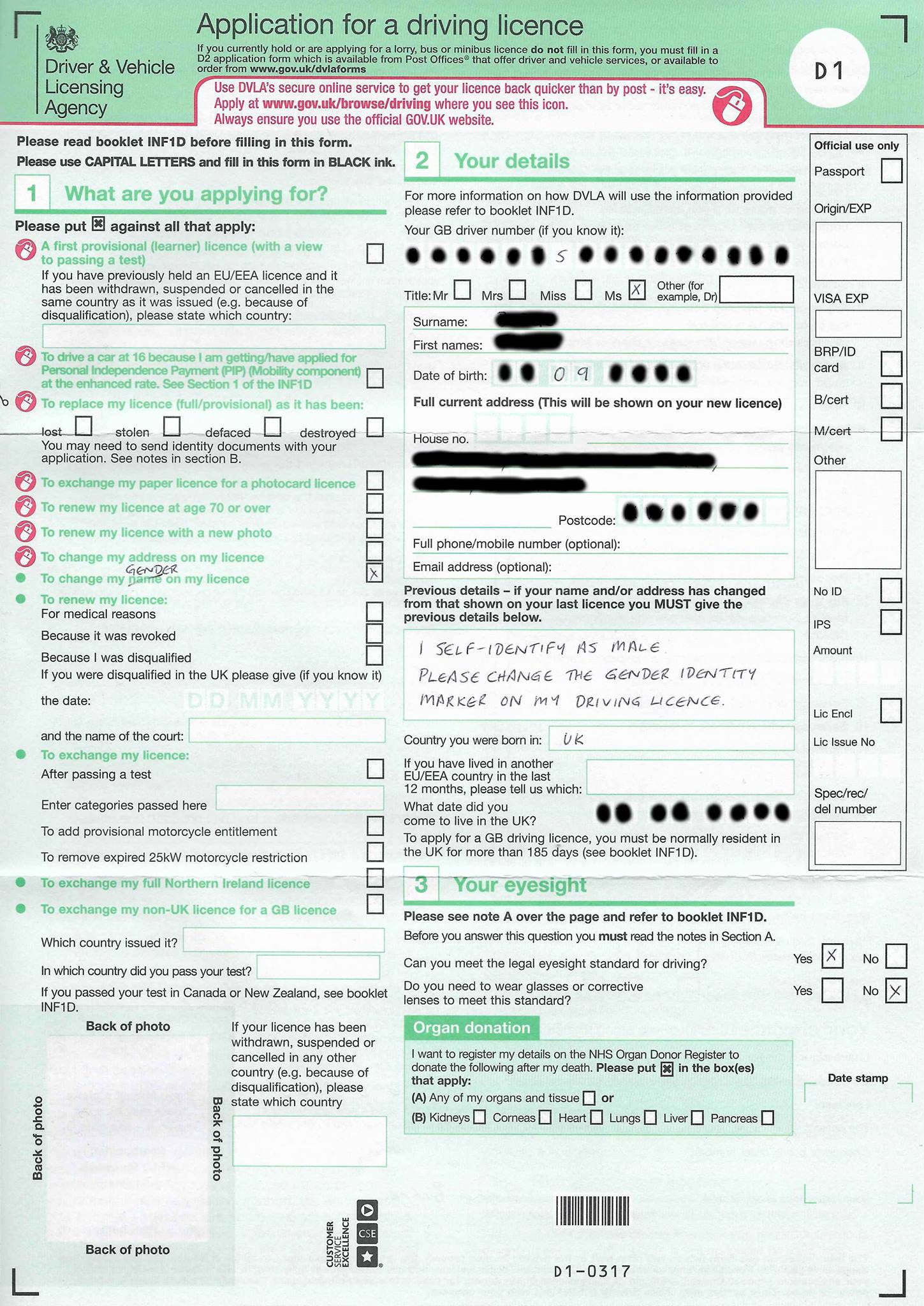 I’ve got a D46P Driving licence renewal application form in front of me. (Not mine, you cheeky boy, wavechange!) It is headed up in red type:

Use DVLA’s secure online service to get your licence back quicker than by post, it’s easy. Go to gov.uk/renew-driving-licence-at-70 when you see this icon. Make sure you used GOV.UK The only official place to find our services and information.

To the right is a wired mouse icon in a red roundel.

Further down the page, just below where you are encouraged to use CAPITAL LETTERS and black ink, and above 1. Your current details is another red mouse icon, stating:

Apply at gov.uk/renew-driving-licence-at-70 where you see this icon.

I wonder if they mean go to the gov.uk website, when you see the mouse icon on the form and skip the rest? I don’t see it anywhere else – certainly not on the website. Just a big green Start now > button.

I reckon its in a beta version of a new website page due for activation on October 1. Perhaps like everything else in the DVLA/DVSA portfolio it’s caught coronavirus and been overlooked.

I think Which? should make enquiries and seek clarification to save confusion for elderly consumers worried about getting scammed through being on a copycat website.

But as you say, there is even the potential for a copycat website appearing with red mice, to demonstrate their “authenticity”.

I posted an image of form D1 with the red mouse at the top yesterday, but Which haven’t ‘approved’ the post yet so presumably you can’t see it. But whatever odd circs have created this it seems pretty clear it’s a pointer to the over 70s online renewal and probably isn’t on any web pages. Who knows? Maybe tomorrow? So I decided that on balance the renewal site without the mouse was genuine and applied yesterday. Despite such a glitch the current renewal procedure is a whole lot better than scribbling and posting a form and praying it arrives, so no complaints.