Going fully cashless will leave millions behind – do you agree with the steps the Access to Cash Review is recommending?

Britain is not ready to go cashless. While many enjoy the simplicity and convenience of digital payments, they don’t yet work for everyone.

Our research found that around 17% of the population – 8 million adults – would struggle to cope in a cashless society.

There is a widespread (and incorrect) perception that the main issue is with the old. In fact, the biggest indicator of being dependent on cash is poverty. Many people simply can’t take the risk of getting into debt, and cash remains the safest way of budgeting.

We have an expensive cash infrastructure built for a world of high cash volumes, which is becoming unaffordable as cash volumes decline. We are already seeing cracks appearing with closures of bank branches and ATMs, but this is just the tip of the iceberg.

Today’s recommendations are built on a huge amount of analysis and data that we’ve gathered, not just from the UK, but also overseas.

We’ve taken into account a wide range of evidence, speaking to more than 120 organisations, including Which? and other consumer groups, as well as talking to thousands of consumers directly.

What we’re calling for

If we do nothing, we will have communities unable to access cash, and unable to spend it. We’re calling for:

An investigation into the costs of banking cash for small businesses

A requirement for essential and monopoly services to accept cash

As cash is free for consumers, we don’t tend to think much about the costs. But behind our ATMs and shops is a complex and expensive infrastructure costing around £5bn per year.

This was built for an age of high cash, and for profit. It’s now expensive to operate and, as cash declines, becoming uneconomical. If we want to keep cash viable, we need to think radically.

There are examples in Sweden, Norway and Finland that we can learn from. As their cash use has declined, they have created a joined up ‘utility’ for the wholesale infrastructure supporting cash, to keep cash viable.

We’re calling for the Bank of England to convene a group to develop a radically different model for the wholesale management of cash.

We can no longer take cash for granted. We need clear government policy on cash, a programme of work to develop digital payments which can include everyone, and a joined up oversight and regulation of cash.

Cash can no longer be seen as just a commercial issue. We believe that our recommendations will help keep cash viable for consumers, in a way which industry can afford.

But we now need action, before it’s too late – before we lose our cash infrastructure and millions are left behind.

Help us protect cash as a payment option: sign our campaign

Do you feel that we’re sleepwalking towards a cashless society? How could we be more prepared?

I feel very strongly that it’s important to keep cash. From the point of view of Big Brother suveillance over our personal lives, to the spare coins in the jar. Cash is a concrete physical representation of the value we have to exchange for goods and services. We pass over a £20 note. We see it, we feel it, and that connects to our decision whether or not to spend because it has a physical reality. Billions can be made and lost when it’s all digital. Also it’s easily forgotten that the money in banks is OUR money. And how do you give to a homeless person in the street, or a child who wants to buy an ice cream from the van?

The digital system is extremely fragile, square and inflexible. Not at all natural and diverse, and not at all perfect. Making us completely dependent on that system is pure stupidity. Just my opinion.

Enforcing the use of a traceable card, combined with ‘smart’ metering will lead to almost total surveillance capitalism. Do we want this. The present system will probably see me out (I am in my ninth decade!), but I will be refusing the installation of smart meters, and will continue to use cash wherever appropriate.

It is vitally important that we keep access to cash particularly for older people many of whom do not wish to use, or are frightened by, ‘technical’ banking methods.
It’s all very well for young people and banking businesses to say that everybody must adapt but there are still a substantial number of people who do not have the understanding to change their methods.

We live in a free country, and it is our choice how and by what method of transaction we use, removing choice removes our freedoms, being free to chose is fundamental to are democracy.

Its essential for safe guards to be put in place , and I feel that it should be the banks them selves, not utilizing another source. More complications and confusion, Already one bank has indicated that they will not be responsible for any funds transfer using there surrogate outlet.

I share many of the reasons stated by others as to why it is imperative that we retain our access to *our* cash … everything from concerns about complete dependency on technology to surveillance to the affect on those who are marginalised because of age or economic factors. Bottom line is I don’t want to be reliant on a system. I want cash-in-hand, my cash.

I think its absolutely barmy to even consider a cashless society!. Are humans to become subjects to technology and controlled by it?. Imagine the global consequence in event of a major solar spike from the sun damaging our satellites, the possibility is a real threat!
The result is no banking, data , communication, travel chaos and global mayhem and anarchy.
Think about!

There was a time after when we replaced our old phone with one that had to be plugged into an electric socket, and before we had mobile phones, that we were incommunicado whenever there was a power cut.

Twenty or so years later and so much more of our daily lives reliant on technology, and you are right, if it failed there would be global mayhem and anarchy. We would be back to bartering and cash would be paramount for survival.

I am hoping, that if the banks do decide to stop supplying cash [and I presume it is their decision], that the government has a big teapot on a mantelpiece somewhere where a useful quantity of notes and coins can be kept as a contingency reserve. Otherwise we should have to go cap in hand round the Commonwealth looking for suitable moolah.

It is vitally important that the UK has inough funding for infrastructure to pay for emergency, public and armed services. The money should also be sensibly invested to provide for highways, hospitals and our NHS, education and our educational institutions, local governemtn and their individual power to allot and spend wiely on much needed resources.

I am secretary of a small club that race pigeons for a hobby and the birds are timed by means of a specialised clock. I remember from thirty years ago when members wished to purchase a new clock they would come to me for a cheque, and gave me cash they had taken from a hidden stash in their home. This is not healthy nor safe. With the loss of hundreds of Bank branches there will be some who revert to this primitive system. Even with cash machines not everyone uses these and in this age of poverty and hardship live on a day to day basis. We are a sad and rapidly declining country. In my view a cashless economy should never be allowed to happen.

I’m away visiting friends and our host said that there was time to call in to a recently opened micropub before the bus arrived. It’s the first time I have encountered anywhere that would only accept cards. 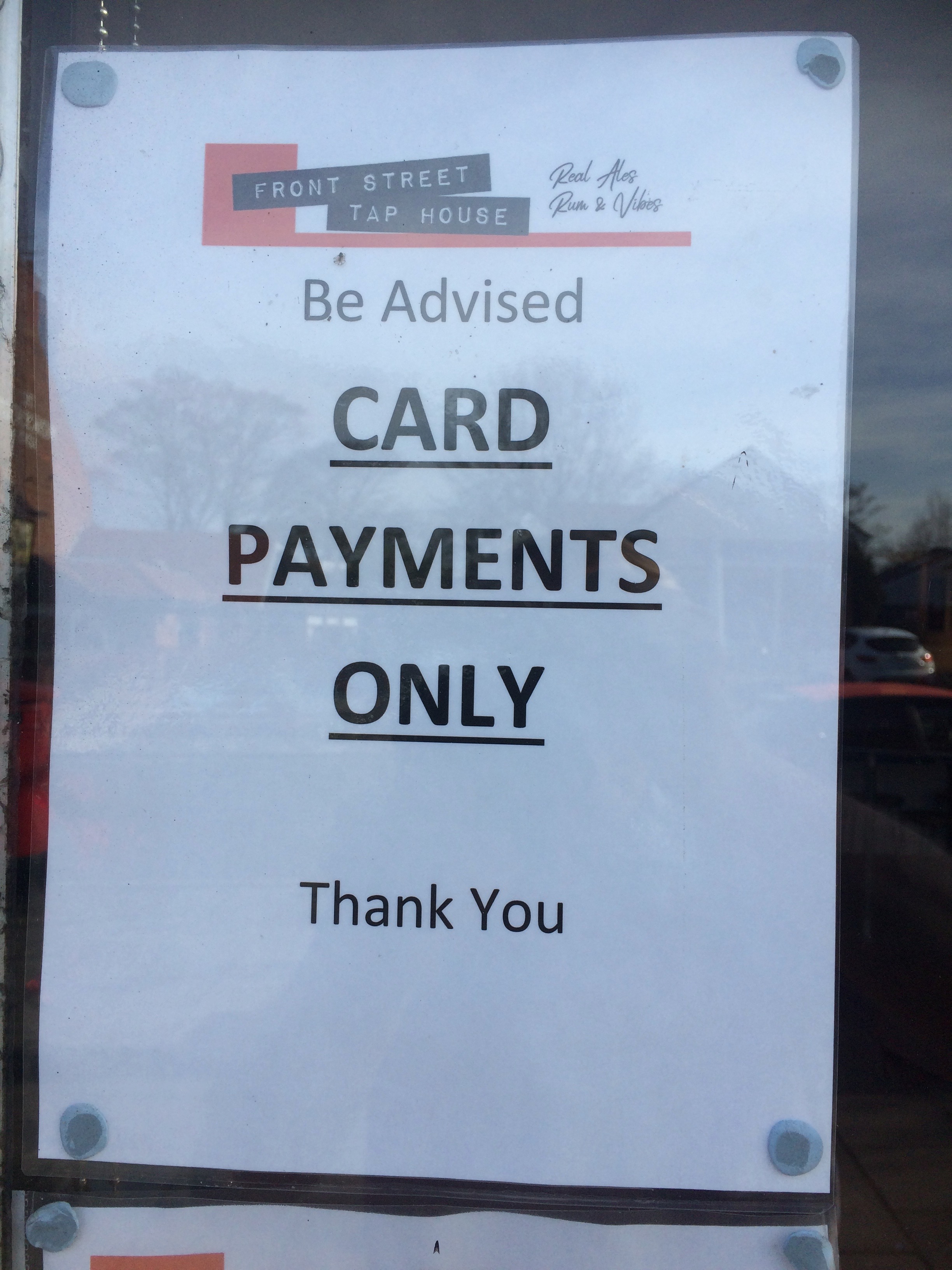 Well, it looks like the 1p and 2p coins could be on the way out. The Chancellor of the Exchequer is shortly due to reveal the outcome of a review into their continued issue. Of course, no prices would need to be changed and there would be no risk of inflation since we could use cashless forms of payment; . . . not sure about that.

I shall start saving a few for use as cheap washers.

If everything was in five pence’s it could work. Indeed the copper coins are the ones that cause me, as treasurer, most hassle since it is quite hard to get a bag full of one’s and two’s and they hang about in the cash box longer than any other coins. I like to bank whole bags when I can.
Sadly the farthing sweet and penny chew are distant memories. 100 5pence’s in a bag is a squash and they take some gathering too. Again, in the good old days, there was a significance to the smaller coinage, even if it were to pay a visit to the public lavatory (Ah, the penny’s dropped I see.) Now people might not even stoop to pick up a stray ten pence coin on the road. If everything was multiples of 20p, 50p or a £, it would not cause that much inflation but we’d still have to keep the 10p in order to supplement the 20p in change. The mint could issue 25p coins and that would take the 10p out of circulation. I’m certainly not arguing for the removal of money as a means of payment, but looking round the shops today there is very little on sale under 20p and it might be time to rationalise small change.

There might not be many products on sale at 1 or 2p, but there are products that are 6p, 43p, 99p so rounding up (inevitably) will lead to increased cost – “growflation”?. We seem to get very exercised about “shrinkflation” where we pay the same for smaller products – is this any different.

Many (including me) believe that when we moved from our 240d per £ currency to decimal, many traders made money out of the lack of small denominations – the halfpenny and penny died – until some time had passed, It will happen again.