Pennies are everywhere in my house. At the bottom of my purse, rattling around money boxes and hiding in pockets. Would we miss them if they were gone?

Despite 1p and 2p coins turning my flat into a copper mine, I can’t honestly remember the last time I used a 1p coin to buy something.

I’m not alone in this. Research by the Treasury found that six in ten pennies were only used once in a transaction, then stashed away or lost. In fact, rather shockingly, one in 12 are thrown straight in the bin.

With that in mind, how much would we be affected if the coins were demonetised?

If the UK was to hold on to its small denominations, it’d be bucking a global trend.

More than 21 countries have scrapped their equivalent of the 1p or 2p, including Ireland, Australia, New Zealand and Canada. Indeed, in Australia the metal from the melted-down coins was made into bronze medals for the 2000 Sydney Olympics.

Due to inflation, the penny’s spending power is decreasing every month. It’s now worth less than the half-penny was when it was scrapped in 1983.

You might care more about copper if you paid £2 for a £1.97 purchase, and received no change. What shopkeeper, after all, wouldn’t choose to round up rather than down?

Rounding up may be most worrying for those who are already vulnerable. People on lower incomes tend to rely more on cash for their day-to-day essentials. When you’re literally watching every penny, even a tiny increase can hurt.

Then again, analysis by two Bank of England economists suggests prices are unlikely to rise across the board – and experiences overseas seem to bear this out.

People using cards would still pay the sticker price, while those buying more than one item will only have the total rounded up or down. The change we receive from pennies is a tiny proportion of our total spend – so most of us wouldn’t see much difference in our day-to-day expenses.

Charities that rely on coin donations have also warned against scrapping pennies – last year alone, we donated over £320m in loose change, according to one survey.

Of course, people may just continue emptying out their coin purses, which could even increase donations if 5ps or 10ps are given instead.

If the penny were to vanish, would you miss it? Or is minting a coin that’s rarely used the very definition of penny-wise but pound-foolish?

1p and 2p coins have been made of copper plated steel since 1992, so you’d need to mine lots of them to get any decent amount of copper.

My personal view is that 1p, 2p and 5p coins are now almost completely worthless, so I would not find if they were all taken out of circulation.

I half agree with DerekP. I suggest that the 1p coin is scrapped. The 5p coin also for various reasons,too small (holes in pockets etc.)
However I would keep the 2p coin. It is large and can help charities, market stallholders and checkout employees if and when one pays for goods with notes.It can be handed over when you are given change to ensure a £1 or £2 coin is given.

Clearly, almost valueless the one penny coin has less spending power today than the halfpenny did when it was phased out in the late 1980s. It is certainly symbolic and the thought of following countries like Australia, which abolished coins below five cents does cause concern if. like them, retailers pretend it is still there in their advertising but round up at the till. Get rid of them but stop retailers falsely claiming something is, say, £1.98 when in fact it is £2. Prices to match the coinage, please.

We store 1ps, 2ps and 5ps in a piggy bank and pay them in once it gets full – I’ve found I can still spend 10ps now and then, but not often.

The image here made me think of these machines from childhood days out to the seaside: 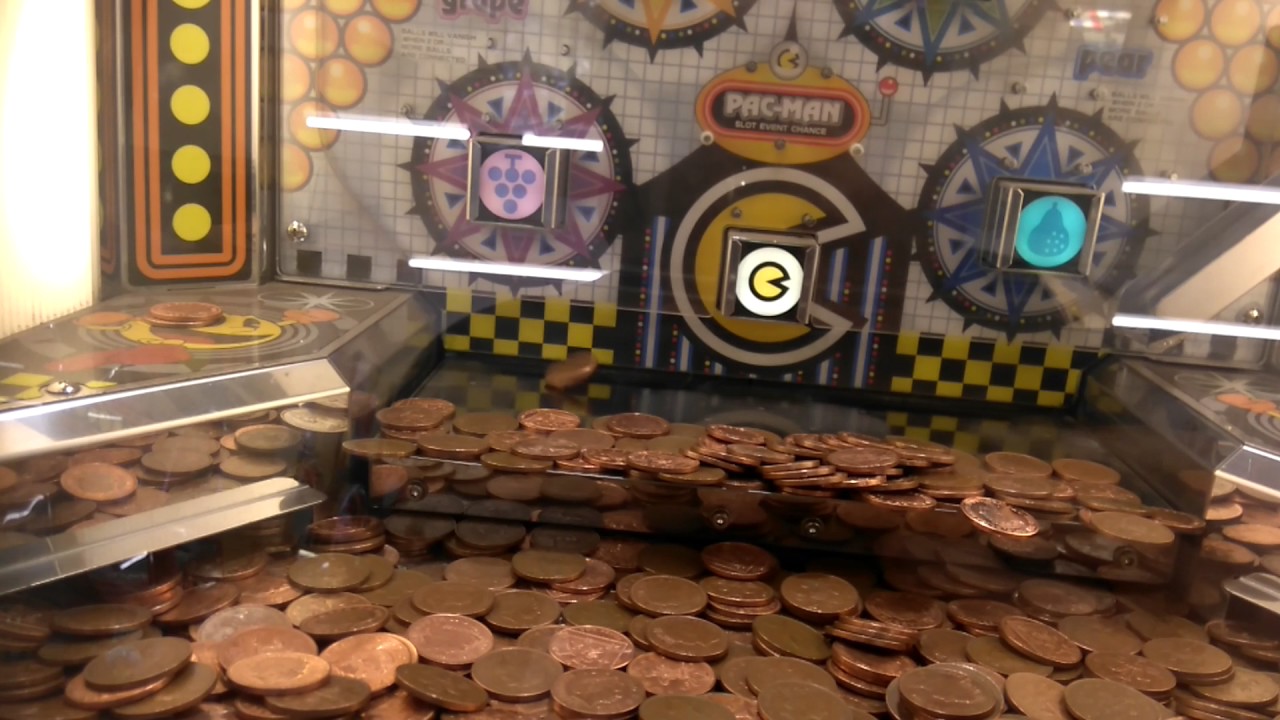 Yes – indeed. Those machines still exist and can be worth saving up your 2p’s for. Then again, the arcade operators will happily give change for proper money.D

Warburton Toll is 12p each way – don’t want to give them an excuse to increase it by 25%! They want to charge via online payment – very silly having to log in to pay that amount and if you need an account like Dartford or Runcorn …..

My goodness. That’s costs less than a Warburtons roll.

The Bank of England says businesses wont round up their prices. Wasn’t it them who said the same when we converted to decimal currency in 1971? Look what happened then (for those who are old enough to remember) many businesses just kept prices the same but in new pence which were 2.4 times the old penny.

Your comment prompted me to empty the contents of an old Maxwell House jar of old coins, Richard. It contained eleven of the old copper pennies, some which were old and quite worn. One pound was indeed worth 240 of these pennies. I have included the only one and two pence coins I could find, showing how small they are by comparison. 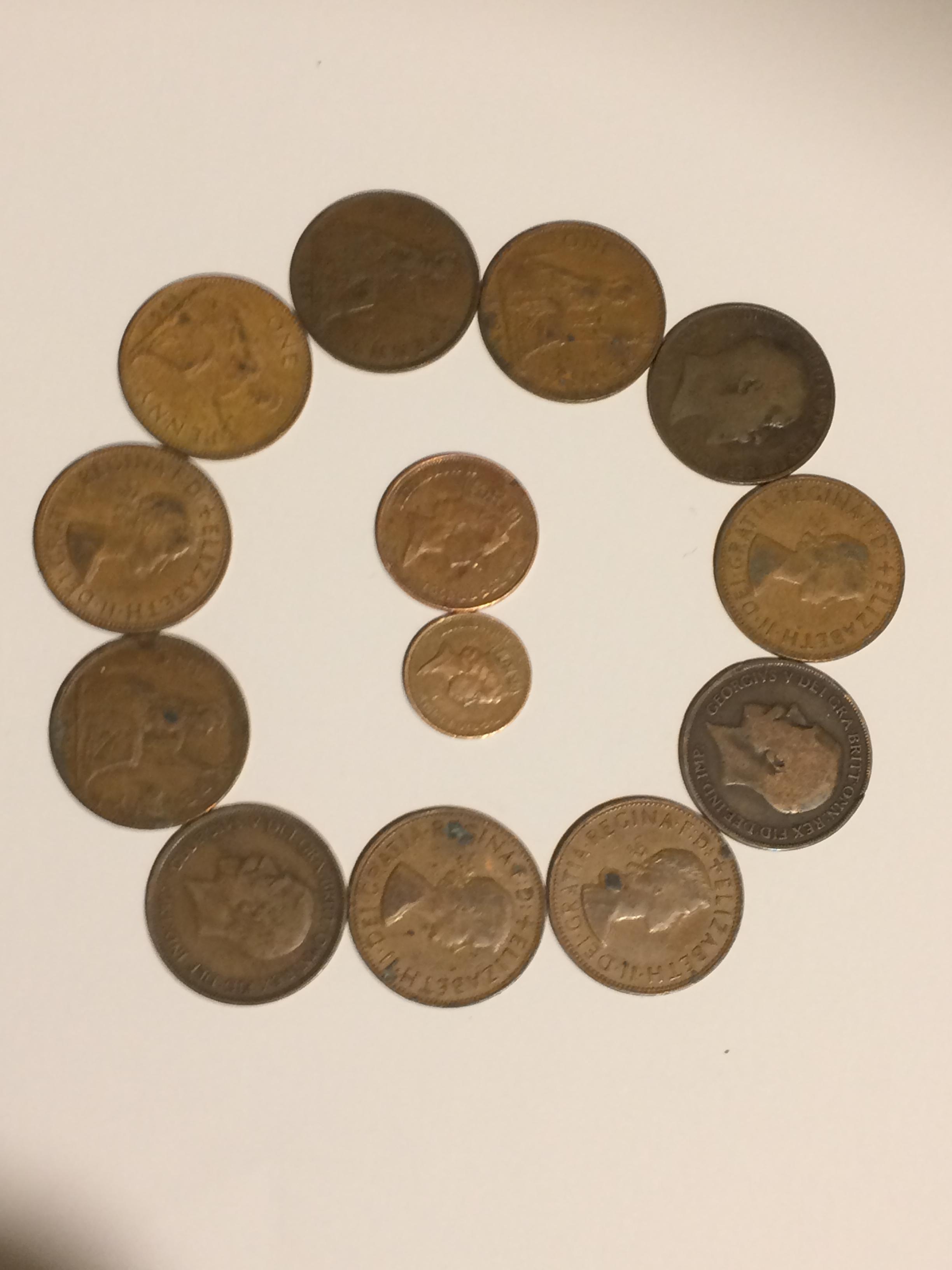 I am glad the continued existence of the 1p and 2p coins has now been secured and that the Chancellor has also announced a new group to secure the continued option of using cash for payments.

With a second class stamp now costing 61p it will still be possible to buy them one at a time which remains important for many people. If the penny and tuppenny pieces had been withdrawn the next price point would have been 65p and even the five-penny piece had been under threat but is now saved.

From a personal point of view, that seems to be the best justification, John. I thought that most products are now priced in multiples of five or ten pence, but looking through supermarket bills that does not seem to be the case.

I wonder how much the loss of ‘copper’ coins would affect charities.

When euro notes and coins were first issued in 2002, Finland never issued its 1 and 2 cent coins, as it considered them too worthless and costly to handle. In Finland, cash payments are by law rounded up or down to the nearest €0.05, whereas electronic payments have the usual precision of €0.01. Because all euro coins are legal tender throughout the Eurozone, Finnish businesses have to accept 1 and 2 cent coins issued by other Eurozone countries in settlement of a debt (e.g. after filling a car with petrol or after a restaurant meal), but the transaction amount is nevertheless rounded up or down to the nearest €0.05 when paying in cash, even if one has the exact change to the nearest cent.

If we withdrew 1p and 2p coins in the UK, then we would suffer similar complications and confusion. It’s better to keep them in circulation.

I receive 1&2p coins, however I don’t want them in my purse, I put them in to some old tin boxes. When I have £1( in mixed coins) I take them to my local post office where they are paid into my bank account.
I do the same with 5p coins.

I wouldn’t miss them. In Australia they (1c & 2c coins) were discontinued years ago. Retailers, however, still advertise items as (for example) $5-99, when clearly you won’t get 1c change!

Yes, that’s true. But retailers there always mathematically round the final bill to the nearest 5c. I think it’s a fair system because about half the time, it works in the consumer’s favour. And I wouldn’t miss 1p or 2p coins either!

Get rid of them. Pay exact amount if paying by card, otherwise if paying by cash, round up or down to nearest 5p. Sometimes it ‘s in your favour, sometimes not. I lived in Australia for 6 years where they have this mechanism.

I’m glad they’re not being discontinued. I empty the Cats Protection collection boxes in my area and they’re usually 3/4 full of copper coins. It all adds up. The drawback of them is the weight in my purse, likewise pound coins. So much lighter when we had paper pounds.

1p and 2p now obsolete .. but 5p is the best golf ball marker in the market…

Getting rid of our low denomination coins is the same as voting for large price increases. Keeping the small coins limits the size of price increases when they come.

For quite a few years Sainsbury’s prices have been rounded to 0s and 5s. The only time pennies are on your bill is when you buy products by weight, such as a loose bunch of bananas.

For people who use cash and are on a very tight budget the pennies do matter. Norman’s comment above is a prime example of the need to keep small denominations – when you buy by weight. If your bananas are all you want, and they come to 32p, would it be rounded down or up if we only had 5ps? This may not bother those affluent commenters, but as we are reminded frequently there are other members of society who are not so fortunate.

If on a tight budget then of course every penny counts. We should be buying more loose products and fewer packaged ones, which means prices need to include pence. I too remember decimalisation when prices certainly changed, usually increasing. Also, if I buy something at £5.99 I can hand over £6 and get 1p back, which eventually can go into a charity collection box – these pennies really do mount up for charities. The weight is no problem if you store them at home and just take a few pennies in your purse at any one time. People keep saying we are moving into a cashless society but I see no sign of it here in Sussex. Perhaps London is different – it usually is. I agree there is a group of people for whom paying by cash seems terribly old-fashioned and inconvenient, but they are only a small section of society so far. Personally I would avoid a shop which told me I was only welcome if I pay by card.

Yes, we need to keep these coins. I help in Oxfam and & we really would miss these coin donations as all other charities would too.

1p & 2p coins are the most useful coins there are, they keep inflation down. Purchase a container of Milk, currently priced at 85p, a price rise currently currently could be 1p or 2p but disposing of these little ”worthless” coins would mean a hefty increase of 5p. What does that do to inflation. Yes buying a car even 2nd hand 1p’s & 2p’s mean nothing, but who buys cars with cash nowadays.

The article comment about not receiving change from £2 for a £1.97 item sums the situation up. You don’t want to not receive the 3p change but then you don’t want the coins as they are a liability! The number of cases that the difference would matter are minimal. Compared to the costs of minting them, managing them, etc. It’s just not worth it. And as for price inflation, there are various articles on Which regarding package size shrinkage so I think it’s the least of our problems to lose the 1 and 2p.