When was the last time you saw Mrs Tiggy-Winkle and her family in your garden? According to a recent survey, there’s a good chance it was over a year ago…

After a few false starts to spring, I’m slowly getting through the list of gardening jobs I set myself back in the bleak midwinter.

Alas, as soon as I tick jobs off the list, I’m finding a whole new set of things that need doing.

My chief problem now is the last panel of my neighbour’s fence has completely disintegrated, leaving a gaping hole in our boundary that the local cats and foxes have clearly been using as a thoroughfare/toilet.

With my neighbour highly unlikely to fix the issue, I’ve been wondering how best I can reinstate the boundary. But reading about the continuing decline of hedgehogs and how I’ve inadvertently contributed to their plight, I’m thinking I might just leave things be.

According to a recent survey, sightings of Britain’s favourite mammal have fallen again, with almost six in 10 people saying they haven’t seen one at all in the past year.

It follow news that the UK hedgehog population has fallen by half since 2000 and it is estimated there are now less than a million compared to 30m in the 1950s.

And when I come to think of it, while I’ve seen an increase of greenfinches, long-tailed tits, squirrels and even parakeets and herons in my garden in the past year, I’ve seen neither hide nor spike of a hog.

What can we do?

In fact, I don’t think I’ve seen one since I replaced my fence with concrete gravel boards and posts a few years back. And there lies the problem, as more secure fencing is one of the reasons why hedgehogs are in decline.

So I’ll be leaving the gaping hole in my neighbour’s fence well alone and am now thinking I’ll widen a gap I’ve seen in my own fence to create a hedgehog highway. I’ll also be using organic slug pellets, researching wildlife-friendly shrubs (that also suit part shade – suggestions welcome) and erecting some bug hotels.

After all, help the wildlife and it will, in turn, help me.

Some people like badgers, others like hedgehogs – but who will stand up for slugs? Do they not have any good features? I think most of them are repellently unattractive but I would never kill one.

Slug slime is an example of a class of polymers called hydrogels. Adhesives that will bond to tissues and are non-toxic have been developed that mimic the properties of slug slime: https://phys.org/news/2018-03-team-hydrogel-adhesives-wounds.html

I don’t like maggots but they have role in wound cleaning. The problem we humans seem to have is we like to tamper with nature without really understanding what we are doing.

Hedgehogs – we leave out 2 pet feeding bowls around 8.30pm each night containing unsalted peanuts, mealworms and a few raisins, plus some water. Number feeding now up to 4. A pile of tree and hedge cuttings at the top of the garden are where some have made home. A few spaces in the borders allow them to explore nearby gardens.

A few weeks ago, I actually saw a dead hedgehog on the roadside here in Gloucester. That’s the first one – dead or alive – that I’ve seen for ages.

In contrast, both foxes and bunnies are far more commonly seen round here.

Agricultural slug killers such as methiocarb and metaldehyde are believed to be significant factors. The hedgehogs are killed by eating poisoned slugs and snails.

for three years now we have followed the coming and going of “our” hedgehogs as they visit our feeding station and make use of the hibernation boxes we provided ,much of this was recorded on a trail cam ,we have seen as many as three at a time feeding ,this year the hogs awoke in spring and just disappeared .
We have not seen a single hog over the whole summer ,we had hoped that they might visit again now that the winter is around the corner but no sign ,has the very hot summer decimated them ???
Has anyone else had similar experience.

Perhaps it was the slugs that suffered in the heat and deprived the hedgehogs of their main food source.

I remember seeing them regularly in my garden as a child, but haven’t seen one for years. I’ll look into making my garden more hedgehog friendly. I miss them.

I’m still yet to ever see one, but do remember always checking the bonfire before we lit it when I was younger to make sure it didn’t have any inhabitants!

We have three hedgehogs in our garden one even sleeps in the house we made them, we feed him on cat food and mix it with hedgehog mix. They are fascinating to watch, one was rolled up in a ball the other day because she didn’t want anything to do with the other one whom was trying to get quite amorous.
We count ourselves extremely lucky that they chose our garden in Eastbourne. 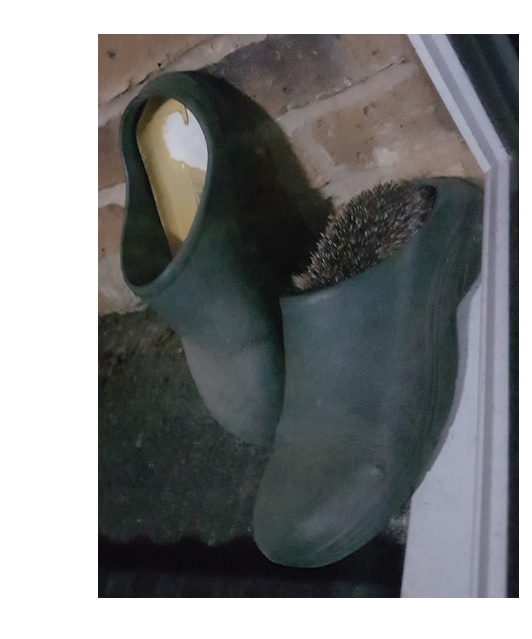 Both shoes were leaning against the wall and it firstly spent a while underneath them. When we checked back again, it had made itself at home inside the clog and spent at least an hour there.

At least 3 hedgehogs are visiting us at the moment which is wonderful to see.

I had 5 hedgehogs in my garden last tear, fighting over the food at times. Only one this year but he/she has not been seen for a few evenings, the food remains untouched. I wonder what’s happened .

One of my neighbours feeds the hedgehogs in my close. I also get regular but not daily CCTV footage of one of them crossing my front lawn.