According to a YouGov poll, almost half of consumers would rather pay more than see their favourite products shrink. Are you among them?

Since I started working for Which? almost two years ago, the word ‘shrinkflation’ has become part of my everyday vocabulary.

And it isn’t one that trips particularly easily off my tongue, particularly when I find myself applying it to some of my favourite products – most recently to Bird’s Eye fish fingers.

To me, it’s particularly distasteful when it’s not immediately obvious a product has shrunk from the packaging.

In fact, I’ve abandoned buying Toblerone in the UK because of how its manufacturers chose to shrinkflate the bar late last year.

Should I find it in its original guise abroad, I’ll probably stock up and proffer the ‘retro’ bars to friends and family.

While I appreciate that the cost of ingredients has gone up and manufacturers need to pass these on to the consumer, I can’t see why they can’t just keep the size the same but increase the price slightly.

If the price wasn’t put up by ridiculous amounts, I know I’d suck it up for my favourites.

And a recent YouGov poll proves I’m not alone in thinking like this.

When consumers were asked if they’d rather pay more than see their favourite products shrink, 46% said they would.

Another 17% stopped buying a product because the size went down and the price remained the same.

And although 38% said they still bought a product when they knew it had been reduced in size, almost one in five (19%) stopped buying when the price went up and the size went down.

So where do you sit on this? Would you, like me, prefer to pay more for your favourite products rather than see them subjected to shrinkflation? Or do you think the practice is preferable to rising prices?

Thinking of when a product you buy was reduced in size, did you stop buying it?

Yes, I stopped buying it even though the price decreased too (2%, 22 Votes)

Figures from the Office for National Statistics (ONS) proves that shrinkflation is becoming widespread. It found that over the past five years, as many as 2,529 products have shrunk in size but the price has remained the same.

Although toilet roll, fruit juice, beer, sausages and coffee have all been subjected to the phenomenon, it was most notable in sugar, jam, syrups, chocolate and confectionery products.

And while manufacturers claim that it is down to the cost of raw materials rising, the ONS has cast doubt on this.

The European import price of sugar has actually been falling since the middle of 2014, and reached a record low in March 2017. While the price of cocoa reached a five-year high in December 2015, but has fallen sharply over the past year.

It also dismissed Brexit as a reason for shrinkflation, saying: ‘Our analysis doesn’t show a noticeable change following the referendum that would point towards a Brexit effect.

‘Furthermore, others (including Which?) had been observing these shrinking pack sizes long before the EU referendum, and several manufacturers have denied that this is a major factor.’

In response to the latest statistics, Alex Neill, Managing Director of Which? Home Services and Products, said: ‘We have found that many popular household and food products have shrunk over the years, often with the price staying the same or increasing.

‘Manufacturers and retailers should make any changes to their products clear otherwise they risk people feeling cheated.’

Are you surprised by the amount of products that have been subjected to shrinkflation? Do you think more should be done to stop the practice? Have you spotted any shrinking products?

ALDI have this week increased price of bananas again – now 81p for a ‘five fruit pack’, and the bananas look smaller than ever! Based on the previous check-weigh (818 gms) this puts the price at 99p a kilo. That’s an increase of 38% over a few months.

Thankfully, still only 76p a kilo at Lidl!

Much to my disappointment another beloved product has fallen victim of shrinkflation – the Jaffa Cake. Today I learnt that a twin pack of 24 would be reduced to just 20. I’ve got to say I’m a bit heartbroken about this, I’ve only recently found my love for Jaffa Cakes, but now that I have I didn’t have any plans on slowing down.

Maybe this is a sign I should cut down, or do I just buy more packs? hmmm…

M&S Jaffa cakes are just as nice (in my humble opinion). Don’t know what they cost, as none bought lately, but you could desert McVities. Welcome to the Parliament of the Consumer 🙂

Earlier this year I commented about the fact that Jaffa Cakes did not show the weight on the packet and the explanation by McVities: https://conversation.which.co.uk/food-drink/shrinking-products-yougov-poll/#comment-1480353 I have not found any other products that don’t show a weight on the packet.

Sorry to use the C word before November but…
Quality Street Christmas tins shrinking again?!
https://www.theguardian.com/business/2019/sep/09/happy-christmas-shrinkflation-trims-quality-street-again

Perhaps not a bad thing from an obesity viewpoint? 🙂

“Quality Street is slimming down again for Christmas this year as its new seasonal 650g tubs hit UK supermarket shelves this week, downsized again from 720g last year.” I found one of these plastic tubs and it is marked 750g. 108 grams of purple polypropylene. At least it is marked “Enjoy, then reuse or recycle”

“Nestlé believes that there is an urgent need to minimize the impact of packaging on the environment.” Maybe they could print that on a cardboard box.

Interestingly, Nestle sell a 1,2Kg box of quality street in a simple cardboard box, It works out as more expensive than the tubs sold by Asda.

If one isn’t desperately concerned about having the actual very large tin, Asda are currently flogging Heroes, Quality Street, Celebrations and Roses for 66.7p, 61.54p, 61.4p and 66.7p respectively – all per 100gm, of course. That represents a significant saving over almost everyone and equals Costco’s deals.

I approve of the unit prices.

Will it be Quality House soon?

Why did Nestle switch to plastic? Steel is strong and being magnetic is very easy to separate for recycling.

Did someone say chocolates? 💝

I can vouch for these not shrinking: 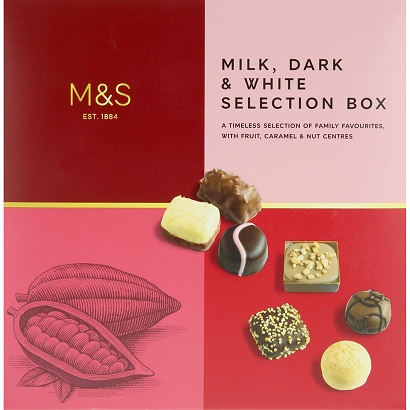 They are so much nicer than mince pies. 😇

“They are so much nicer than mince pies.” – and than Quality Street. It is difficult to find interesting chocolates, but Hotel Chocolat offer some nice selections and they are a sensible size (not too big). However, I’m quite happy with an occasional M&S milk choc Mountain Bar, and an individual bar of chocolate marzipan.

Now you are talking – I would go for Hotel Chocolat quality over Quality (ironically) Street quantity any day!

They also do a Cocoa gin; I really enjoyed it (bought it as part of a birthday present for one of my son’s and was given a taster) 🙂

My favourite choccies used to be Thorntons, but firstly they shrunk and rattled around in their allotted spaces then some of my favourites disappeared to be replaced by over-the-top strange flavours.

I think M&S have managed to make the ones above look interesting to compete with over-the-top chocs, but kept the taste fairly simple and yummy.

I haven’t had much experience of Hotel Chocolat, maybe I am missing out …….🍫

Chocolate seems to have undergone many changes since I was a kid. Milk Tray lost its Lime barrel, a delightful sweet.

And whatever happened to Clarnico Chocolate-covered mint creams? 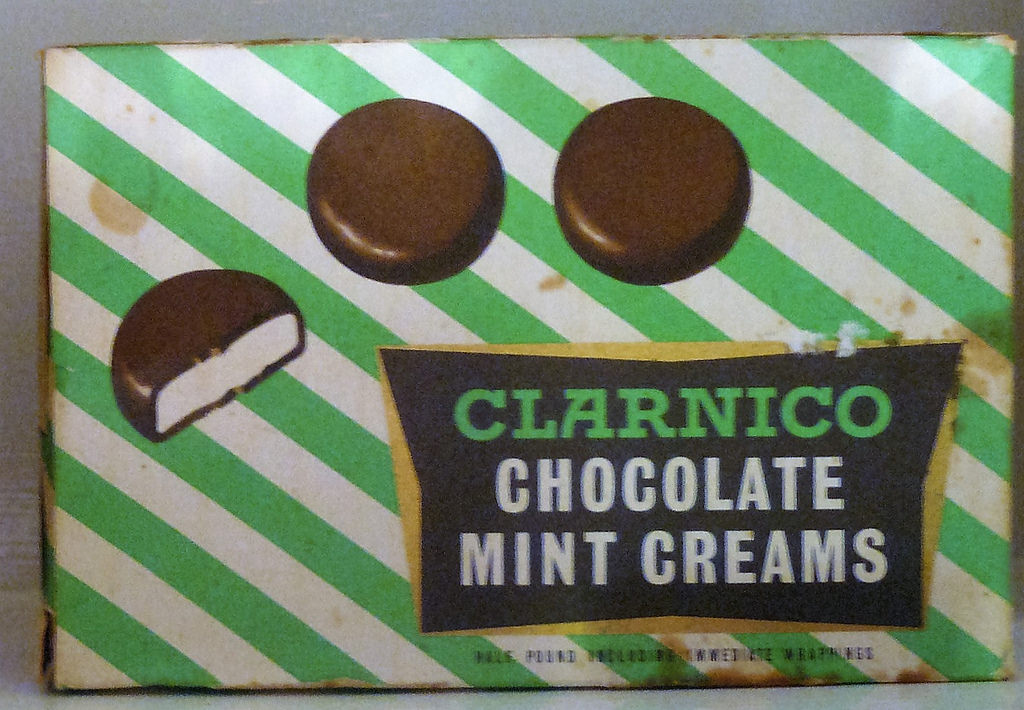 Back in the 1970s, Thornton’s chocolates were a treat but to my mind they have debased their brand by selling cheap chocolates in supermarkets. I still like their chocolate gingers.

For several years I was given several items from the Hotel Chocolat range at Christmas by a family member who had a subscription. I’m not sure what happened but I’m back to getting Marks & Spencer chocolates, which are disappointing by comparison. We have a Hotel Chocolat shop in town but never seem to have any offers. There is also a shop that sells lovely handmade chocolates but they have become a bit too expensive.

I do enjoy some of the M&S chocolates. Lindt are usually very nice too,

I might have to float the idea of a Convo chocolate taste test with the food team! 😀

It can’t be a Convo chocolate taste test unless they are tested by convo regulars.
I volunteer to be a tester.🙂

I will join the volunteers 😀 We’ll need a reasonable selection and quantity to formulate judgements, and perhaps a couple of practice sessions to get our tastebuds attuned.

Your dedication to consumer issues is admirable! 😀

I suppose we both feel that when there are difficult jobs to do, some of us have to step up to the plate. We wouldn’t want to overload the food team.

I would be happy to participate in a scientific investigation…

I rarely eat chocolates these days but would be willing to undergo a tasting experience in the interests of consumer research.