Fancy some turkey-flavoured cheddar with your crackers this Christmas? How about some prosecco-infused mini sausages or even humbugs that taste of stuffing? These are just some of the delights that could be served up at a Christmas party near you this year. Dare you try them?

Over the past few years, the Christmas sandwich has become something of a fixture in sandwich chains and supermarkets in the run-up to the big day. Usually landing on shelves in late October/early November, these offer office workers and the like the very essence of a Christmas lunch between two slices of bread.

As new traditions go, a festive sandwich is fairly easy to stomach (aside from the 2015 Tesco cherry and chocolate monstrosity, that is), as we discovered in our Christmas sandwich taste test.

But some of the festive-themed food you see at this time of year can be just plain weird, some might even say stomach-churning, with retailers seemingly trying to outdo each other year on year.

Who could forget the Pot Noeldle from 2010? Or the ‘Christmas tinner’ of 2013, closely followed by Pilgrims Choice turkey, sprout and carrot-flavoured cheddar from the same year? The delights of 2015 included M&S brusselmole and Tesco duck eclairs. While last year saw Co-op purvey Christmas dinner-flavoured crisps

Meanwhile, Tesco has gone down the Willy Wonka road and created candy cane flavoured crisps: hand-cooked potato crisps with a dusting of peppermint. You can even buy a three-course Christmas dinner in the form of humbugs online.

It seems no food is off-limits. My local chip shop is even willing to deep-fry Brussels sprouts and mince pies. What next, a whole turkey made out of tofu?

Do people buy these products because they like the taste, or just to flaunt photos of them on social media and cause a stir? Or is it all a clever marketing trick to make the festivities last even longer and increase our expenditure?

Whatever happened to keeping things simple and using quality ingredients for great taste – why is no one paying attention to that old adage: ‘Don’t play with your food’?

Do you think these ‘festive foods’ are becoming ridiculous, or do you look forward to seeing what they come up with next? What items have you noticed? Did you try them and would you buy them again?

Giving me more ideas for the Lobby’s offering, Grace. Must be a Kindred spirit. (Sorry; you must get that a lot…)

I obviously don’t get out enough – I seem to have missed nearly all those examples of Christmas madness. Christmas has become an excuse for every ridiculous novelty known to man . . . and then some more. I guess a high percentage goes in the bin. Don’t tell me people actually pick them for themselves! We try to give good and useful presents. If some one gave us one of these I think we should have to review their continued presence on our Christmas presents list – or give them back next year.

John, the best way with unwanted durable presents is to recycle them each Christmas – wrap them up and give them to someone else, or the original presenter. The original donors have probably forgotten who they gave them to.

Has anyone found Christmas crackers with decent, if low-cost – contents? I had a pack of spectacle arm screws and screwdriver in one – came in very handy and saved a trip to the optician. I’ve had usable nail clippers, measuring spoons, bulldog clips, infuriating metal puzzles….At least they had a use. Are Which? doing an up-to-date test (the last I can find was 10 years ago).

Good idea, Bishbut. But, as you perceive, the world of marketing has plotted slots throughout the year for seasonal merchandising and Christmas fills a useful space between Hallowe’en plus Bonfire Night and the New Year then Mothers Day [11 March next year – but the build-up begins well before]. There is also my sister’s birthday in February to work around so the options for making any significant changes are limited. When you throw in all the other Relatives Days, the Boat Race, the Grand National, the Cup Final and The Derby, the calendar’s already pretty full. The marketeers are also not unaware of the need for people to have short spells of earning potential in between these events in order to splash out on supplementary consumables.

I am surprised how quickly Easter has become a major present-giving opportunity. It is a true test of the success of our ambitious austerity programme.

I will be staying with family over Christmas and if these expensive products are sold off for a fraction of their original price after Christmas I may find myself eating them.

I’ve noticed that M&S have brought out a Christmas pudding-flavoured smoothie. It doesn’t look particularly appetising and probably doesn’t beat having the real thing (and I dread to think of the amount of calories and fat it contains). That said, I’d definitely be up for a taste test.

Candy cane crisps might be a bit much, though…

We went through the Looking Glass with Brexit, into the Twilight Zone with Trump, and now Christmas is getting preposterouser and preposterouser.

Sophie, and getting more preposterouser. However we have the choice as to what we do and spend at Christmas. This year, first time, stockings only for us and presents for the little children (they get a lot of excitement opening gifts, providing they are not pyjamas and woolly gloves). But having an official festival for being frivolous and silly may do many of us good.

Almost everyone makes an effort at Christmas to be particularly nice to others. How could we make that last all year round|?

Can I recommend a Christmas Winbag. Traditionally Christmas and windbags have been a danger.

This however is a very useful tool. Axminster have them at a reasonable price and pay UK taxes !
axminster.co.uk/winbag-air-wedges-ax649735
It is the kind of thing Which? should mention. It has been around a couple of years and is exceedingly well thought of. Perhaps someone could mention to Axminster it is rated to 135kg not 100kg. 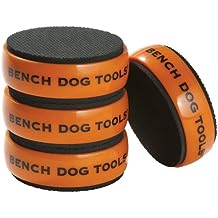 Cutting sheet material with a hand circular saw, or routing it, is a pain – wooden spacing bits underneath and clamps to hold it in place. Bench Cookies are brilliant; just position them on a clean bench, lay the panel on top and they will hold it in place while you cut or rout – no clamping needed. I’ve got 8 – does big panels..

Re Christmas themed foods that are bordering on the ridiculous.
The only reason these are marketed is to cash in on possibly the biggest annual celebration in the Christian world. If people didn’t buy them there would be no profit in them, the producers and retail outlets would make a loss on these lines, thus, like any loss making product they would be removed from the market.

Exactly, Grumpygit – the market will decide what is ridiculous; what will sell and what won’t. A large amount of product development is speculation. Most major retailers and manufacturers set aside significant budgets for this purpose because standing still is not an option. What flops this Christmas will not reappear next year but another novelty will emerge. I have no doubt that the retail price of such foodstuffs includes a fat margin for remaindering it without loss after the festive season.