Never mind how you eat yours – how much do you pay for yours? During our Easter bargain-hunting we found price differences in Creme Eggs that left us scratching our heads to work out which ones were cheapest.

I don’t usually buy Easter eggs – I don’t have children, and most of my friends would rather I shout them a pint than hand them a pile of chocolate. But occasionally I like to jazz up a party, and I thought that my next one might benefit from an Easter egg hunt.

So how do I get the best value on a box of Creme Eggs? Well, I should just buy the biggest box, right? Not necessarily.

I’m happy to spend some time hunting down the special offers, but at Easter time things seem to get even more bewildering. It’s not just a case of comparing prices, but comparing different deals to see where you get the most chocolate for your cash.

It would be easy enough for me to compare costs if everything was priced per 100g – I’d just pick the box of eggs with the lowest unit price and then get as many as I needed. But when Which? went to some supermarket websites to have a look, we discovered it wasn’t quite that easy – some eggs were priced up individually, and for others we were given the price per 100g.

On top of that, I had to work out if I was better off taking a ‘3 for 2’ offer, or whether I should go for the ones that told me I’d ‘save £1’ (neither of these offers had the unit price displayed for the promotional price). From Waitrose it worked out better to buy eggs in packs of six than in packs of 12 – which wasn’t immediately obvious and fought against my instinct to bulk-buy.

In Asda, they charged the same for 12 eggs bought individually as 12 eggs in a bulk pack, which makes sense to me. But then looking at the unit price, they appeared to be wildly different – single eggs were labelled with a unit price of £1.22 per 100g, and 12 packs had a unit price of 84.2p per 100g.

I know my calculations might be more than your average person would bother doing (I am now the proud owner of a ‘Creme Egg prices’ spreadsheet) but I think it shows how useful it would be for us if supermarkets adopted a consistent unit pricing plan.

Which? is currently campaigning for clearer food unit pricing, which means that squinting at labels and whipping out a calculator in the supermarket could be a thing of the past. We’d like to see supermarkets pricing things clearly and simply – if all food displays the unit price per 100g, these comparisons become much easier.

If you agree, please do sign up and support our unit pricing campaign – we’ll be talking to supermarkets about this later this year, and we want to show them just how much this small change can help people spot the bargains from the bad deals.

How much is yours?

In the meantime I thought it would be fun to have an egg hunt of our own – can you find the cheapest, or the most expensive Creme Egg?

We’re offering a £20 John Lewis voucher to whoever spots the best and worst value eggs. It’s a bit tricky to work out – some are priced singly, without the unit price. Others show the unit price, but not for special offers, so you might need to do a bit of mental arithmetic!

Going purely on the price per 100g, can you find a stunning bargain (or a really bad deal) at your local supermarket? Send us a picture of your Creme Egg deal to which.campaigns@which.co.uk by noon on 12 April, along with the name of the shop where you found them, and we’ll give a voucher to the best and worst value discoveries.

1. The prize draw is open to UK residents aged 18 or over. Only one entry per person. Employees, their immediate families or anyone connected with Which? are not eligible to enter.
2. The closing date is noon on 12 April 2012.
3. There is no alternative prize but which reserves the right to substitute a prize of equivalent value at its discretion . In the event of a tie, the winners will be drawn at random.
4. The winner will be notified by email by 13 April 2012.
5. The winner must claim their prize within 14 days of being contacted. Proof of entering the competition will not be accepted as proof of receipt.
6. If the prize is declined or forfeited, Which? may at its absolute discretion draw an alternative winner.
7. The name of the winners and the photographs showing the price will be published on Which? Conversation by 20 April 2012. Which? reserves the right to feature details of the winner in future publications or promotions.
8. The promoter is: Which? Limited, 2 Marylebone Road, London, NW1 4DF.
9. By entering the prize draw entrants will be deemed to have understood and accepted the above terms and conditions.

I recently bought some Cadburys creme eggs from Sainsburys and they had so many different offers. It is difficult to make comparisons that when they do some offers it is actually more expensive. I recently bought the Cadburys large egg with 2 small normal sized ones. The weight was 178 grams and I bought it on special offer at £1.00. This was more expensive compared to buying a packet of 3 normal sized eggs at special price of £1 but weight is only 39grams x 3 = 117g. They are usually half price or on special offer and I wait until that happens. I usually check if there are any special offers and also check the weightage of the products. Lucky I have my calculator handy so I can work out the exact costs. Every penny counts, like Tescos say, but I would rather that penny is in my pocket than the supermarkets.
I wholly support Which? in this campaign.

You guys are lucky, my local Tesco has a huge display of creme eggs and not a price in sight 🙁

There are bins full of them in the supermarkets; I thought you could just help yourself as you went round – their little reward to loyal customers. Whatever the price, they are a delicious indulgence aren’t they?

Well, here’s the Waitrose prices mentioned by Nikki. Madness that it’s £1 cheaper to buy two 6 packs, than one 12 pack. I don’t understand how this makes sense: 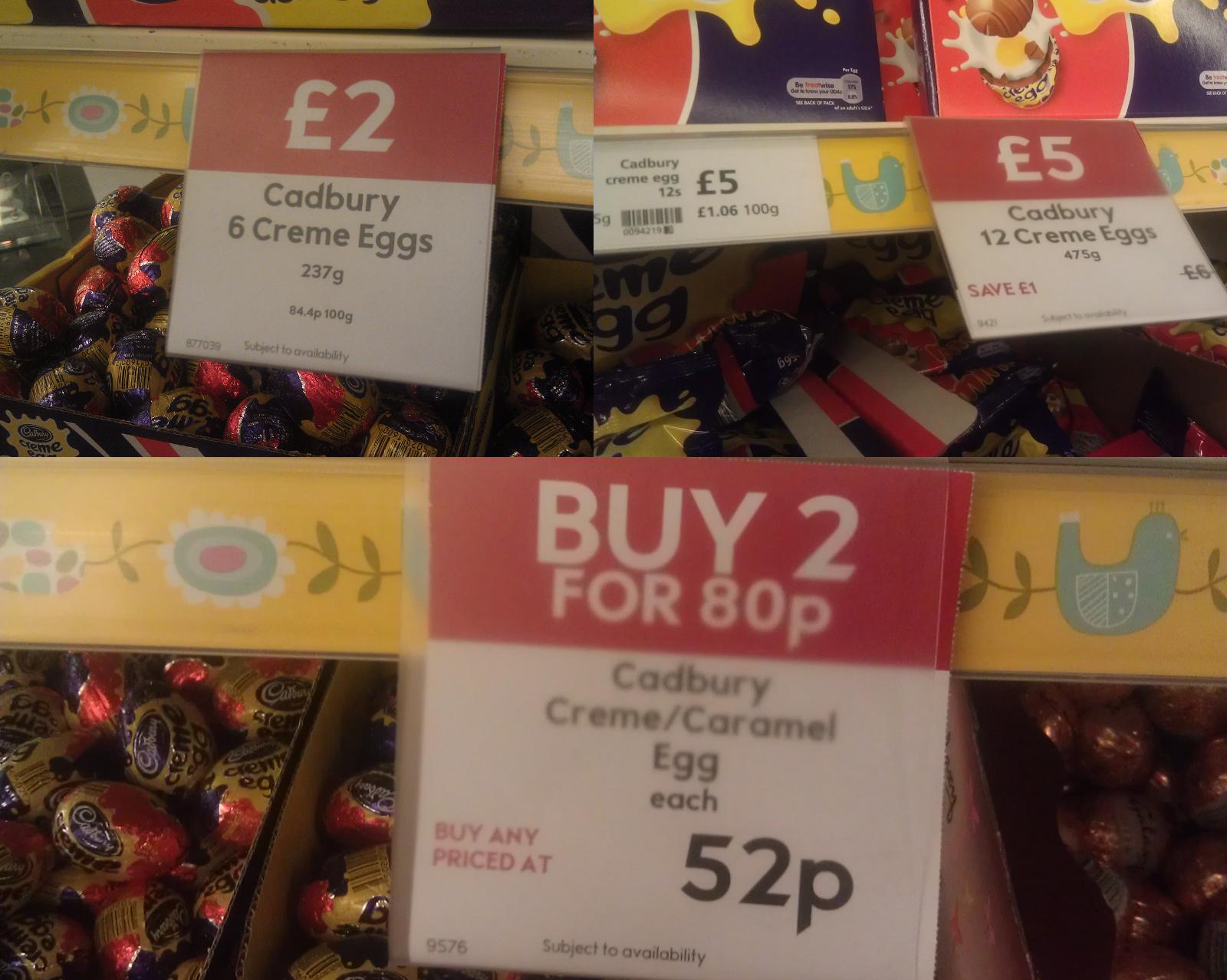 I had a pub meal with a friend and we were given a couple of Creme Eggs when the bill arrived, instead of the usual chocolate or mint. I don’t think ‘free’ counts for the competition. 🙁

Thought you might like to see that Waitrose has responded to this story. Although it wasn’t just Waitrose (we found confusing pricing in other supermarkets too!) it’s good to see that they want to make things a bit clearer for people.

They’ve said:
‘We’re sorry that this has made our Cadbury’s Creme Egg prices confusing for customers this year and we’ll be working to make our prices more consistent in the future.’

And don’t forget, there’s still time to enter the competition! You’ve got until noon on Thursday – you might be able to spot some *really* cheap deals in the sales!

wavechange – I really like the idea of free creme eggs after dinner! I might drop hints in a couple of my local restaurants.

My local Sainsburys was offering Cadbury’s Creme Eggs as follows:

So much cheaper in packs of 6! I took a photo but can’t post it here.

Sorry about the format – it did not post as written. The first price is the pack price; the second is for each egg.

Thanks jonas, well spotted! I wonder how common the ‘cheaper to buy in 6 packs’ issue is with i.e. other products. If you’d like to send in your picture you can email it to which.campaigns@which.co.uk

I see that creme eggs are now considerably cheaper than they were last week. So, anyone reading this who’s Greek, Russian, Romanian, Bulgarian or Ethiopian – this is your chance for a bargain, in time for your Easter this coming Sunday!