It’s still only November but, as I’m not from these parts, I’d like to get ahead of the curve. What makes a great mince pie!? I, honestly, have no idea.

If an alien fell to Earth and you had to explain what is enjoyable about this small sweet Christmas treat, what would you say?

Mince pies are a very recently experienced taste for me, and I’m not quite sure what to make of them just yet.

Which? Guide: how to make mince pies

In my experience at home, Christmas treats would involve cakes and candy canes, Maybe something like a Danish Kringle or even an actual pie might come close to the mince pie concept?

Did you know that an estimated 370 million mince pies are sold each year in the UK during the festive period? Britons eat 27 each year on average!

We’ve covered a similar topic before in the debate between store-bought and homemade mince pies.

Having the plethora of variants; iced, latticed, frangipane etc isn’t helping me either.

So my question to you, as something of a mince pie outsider, is this: what makes a good pie ‘good’?

The crust of the issue

Seeking a deeper understanding, I asked around the office, only to find opinions definitely varying:

🥧 “I like them, but not with the full pastry lid. The star ones are nice”

🤢 “The flavour is too dense and intense”

🤢 “I absolutely despise them, sorry”

But there was one consistent theme: Christmas is the only time of the year anyone will even consider eating them.

Fortunately for me, last Friday Which? revealed the best mince pies for 2019. Will you be heading out to grab a Best Buy this year?

What criteria do you use for a good mince pie? Should I be looking for good texture? Spicing? Fruity taste?

Should the pastry be crisp, flaky or moist? And where do these rank on a scale for sweetness?

Maybe it’s simply the time of the season, with the pie embodying all the memories of Christmas trees, fresh snow, mulled wine and celebrations.

Either way, let me know your tips and advice in the comments.

To be fair the only reason I don’t eat mince pies at other times of the year is it would take away from the joy at Christmas!

I am up to 4 mince pies this year so far. Including my first M&S one – they are magnificent!

Growing up the best mince pies were my mum’s. She is a wizz with pastry. For me a pie will live or die on the pastry. We would have a big party every Chrstmas Eve and when the mince pies came out I am sure the mass movement of people to the kitchen would have registered on a seismometer!

But what do people have on their mince pies?!

Mince pies aren’t the only things to keep for this time of year, mulled wine is another one for me. I can make a good mulled wine, but I haven’t liked the mince pies I have made. I like a dry pastry, not too sweet, and mince that isn’t too sweet either or too spicy, with a sprinkling of sugar on top, but not icing sugar. I could have mulled wine more often than mince pies, just a couple per year are enough. They are beautiful, but very rich and peculiar, a bit overwhelming.

In my previous place of work three of us organised a “Bah-humbug gers” (space in word intentional 😉 ) party every December, usually the last Thursday before Christmas, when we would offer mulled wine and mince pies to the whole house. There was never anything left.

I love mulled wine but again only at Christmas. Need to keep it special. 😉

I will have a go at making my own mince pies – something I have not done for a few years. The Which? Guide on how to make mince pies might prove useful. Consumer advice without any thought for durability. 🙂

The accompaniment for a mince pie should be another one in my book, because it’s not worth putting on the oven just to heat one.

When I was working we had a Christmas party, usually on the last Friday before the event. Most staff had a go at home baking and others turned up with packets of sweet and savoury products. My main offering was a Dundee cake, made well in advance. (I don’t make Christmas cakes because I don’t like making, applying or eating icing.)

In fact a good mince pie is less durable than a bad mince pie! 🙂

Not made any mince pies for years but nothing like the home made versions.

I’m not a big gin drinker but made sloe brandy 8 years ago. So good!

I’m not keen on gin but one of the regulars at our micro-pub brought in a bottle of sloe gin to share with anyone who wanted to partake. Apparently he has made two and a half litres this year. The pub staff don’t mind because they can join in.

M&S seem to have two versions of their mince pies – one in a red box called Classic that was not tested. Is there a reason for that? They seem to be flying off the shelves.

If we were to test all the mince pies in all the shops we would still be doing taste tests! We choose the luxury version of each shop’s to make sure we were testing like for like.

So next year will Which? be testing the economy version which seems to be the choice of most consumers?

I have passed on your request to the testing team and they are going to consider it for next year. It will be a bit trickier to ensure that they are definitely testing like for like as there are just so many different varieties out there but they are keen on the idea. 🙂

My heart goes out to them but I hope they persevere despite the difficulties.

Let me know when you do a gin test. I can relieve your team of work.

I’m not sure that “economy version” correctly describes anything in my local M&S convenience store.

Nonetheless, to deal with the burning question of the day and to re-mediate Which? delinquency here, I have now tested the M&S red box “6 All Butter Mice Pies” against the black and gold box “M&S Collection” mince pies.

I noticed immediately that the Collection pies look noticeably smaller but much more fancy than the plain and simple red box pies. M&S claim the former weight 54g each while the latter weight 58g each.

All pies were preheated in an oven, as per instructions.

The pastry was found to crumble much more readily on the Collection pies. Using a sharp knife I couldn’t really slice them open without also causing most of the pies to disintegrate. The red box pies were found to have much more sturdy cases and could be readily sliced into halves or quarters. Taste-wise, there wasn’t much difference between the flavour of the two pastries.

Regarding the fillings, I think the Collection pies do have a slightly richer and fuller flavour (this may be due to the inclusion of trace quantities of brandy and cognac).

We are deeply obliged to you, Derek, for carrying out this exhaustive and expensive examination of the popular pies sold by M&S, a step too far for the mighty Which? it seems.

To ignore a family product sold by one of the country’s biggest retailers – and regarded as the leader in many food products – and to only try the luxury versions, seemed bizarre to me so we are grateful to you for undertaking this demanding assignment.

I hope you get a suitable reward in due course.

Firstly and most importantly, mince pies need to be animal-friendly and therefore vegan. Then they need to have a medium-firm sweet pastry and a lovely rich fruity filling, with a 50-50 ratio of filling to pastry. All at a reasonable price too.

I agree that a vegan option is desirable but not that all mince pies must be vegan. Shops are free to make their decisions on a commercial basis according to market preferences.

A friend often calls round with discounted products from supermarkets. The most recent one was vegan mince pies: 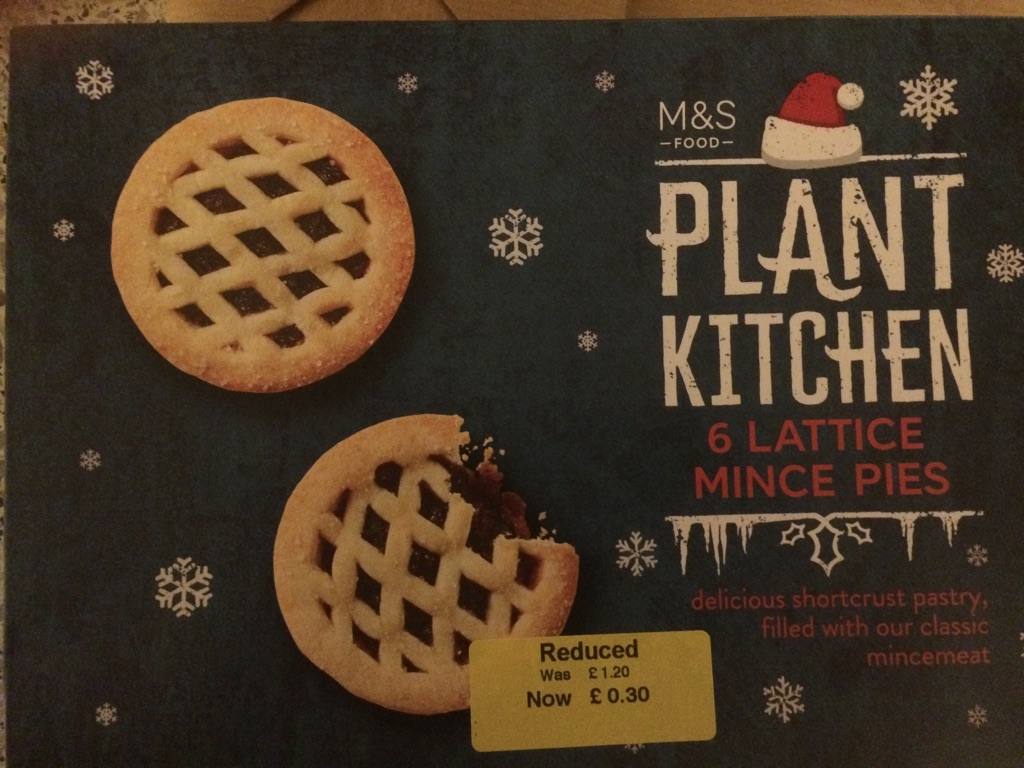 At 30p for six they were a bargain, though I prefer pastry made with butter. The main disappointment was that they are imported (from Poland) rather than made in the UK. We cannot grow bananas, oranges, tea, coffee, etc. in the UK but I’m keen that we are self-sufficient in food supply where possible.

Which?’s mince pie reviews are out again, and this year three supermarket mince pies have been named Best Buys.

You can catch the full review here: https://www.which.co.uk/reviews/food-and-drink/article/best-mince-pies-aiRLI4n2JDko and in the December Which? magazine. NB you’ll need to be logged in with your Which? Member account in order to see how each mince pie scored.

Having wrote this piece nearly two years ago now, and despite really, earnestly trying…I’m sorry, I’m still not into mince pies yet. Are these Best Buys worth my giving it yet another go?

It would be good to have recommendations for mincemeat because that cuts out much of the work of making home-made pies and save packaging waste. I cannot remember Which? comparing the supermarket pies with home-made ones.

I much prefer home made sausage rolls – bought meat-based stuffings make good fillings with bought pastry, so home cooked perhaps rather than home made 🙁 – to mince pies that are too sweet for my liking.